In December, my American Literature classes wrapped up our unit on Adventures of Huckleberry Finn. And over the December break, students began work reading choice novels to begin laying the groundwork for what will ultimately become their independent research papers. Even though the rest of the course is chronological (such is the nature of  most survey courses) — it makes for a nice little stand-alone unit at a time of year where course curriculum is so easily interrupted by holiday breaks, end-of-semester exams, and unexpected snow days. So this slightly-out-of-historical-timeline, “choose your own adventure” approach to mid-year independent research is really a perfect fit.

Yes. Independent research on days when school is otherwise closed for snow and Christmas festivities. Feel that excitement?

Since the research paper is a major grade for the course, it’s no secret that some system of well-formatted note taking will invariably make the actual writing of the monster document SO. MUCH. EASIER. This means numerous trips to the library to browse relevant literary criticism, and the perpetually daunting task of hammering out a complete set of 50 perfectly formatted note cards apiece (yes, paper index cards) to serve as the building blocks necessary to bolster the arguments that will ultimately become 8-10 pages of original writing in which students will present, analyze, and critique their choice works through the lens of relevant scholarly articles.

That sounds like the very definition of a lava-splashing, fire-breathing “Big Bad Assignment” if I’ve ever heard of one. So this week seemed like as good a time as any to try out my first fully themed “Boss Battle.” 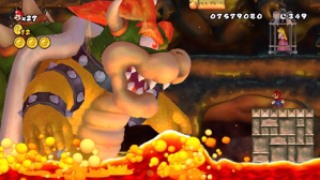 If you’ve ever played one of the games in the Mario franchise, “boss battles” often come in the form of regular encounters with our beloved Italian plumber’s oversized dinosaur nemesis, Bowser. And they are kind of like a big deal. I’ll let the in-no-way-scholarly, but-surprisingly-accurate Wikipedia help set the stage. Highlights are my own:

“In video gaming, a boss is a significant computer-controlled enemy. A fight with a boss character is commonly referred to as a boss battle or boss fight. Boss battles are generally seen at the climax of a particular section of the game, usually at the end of a stage or level, or guarding a specific objective, and the boss enemy is generally far stronger than the opponents the player has faced up to that point. A boss enemy is quite often larger in size than other enemies and the player character. At times, bosses are very hard or impossible to defeat without knowing the correct fighting approach. Bosses take strategy and special knowledge to defeat, such as how to attack weak points or avoiding specific attacks.”

From a curriculum standpoint, this massive research paper will be the biggest “boss” that most of my students will ever have had to face up to this point in their educational careers. To “beat” this boss, students will need skill, strategy, and specific knowledge of some pretty advanced gameplay in the form of quality note-taking, close reading, text annotation, and critical reasoning abilities (to say nothing of the long-form writing task that is to come).

So — back to the classroom.

20ish students in each class, each of whom have read a choice novel by an American author (primary source), then pored over about 10 different library resources (secondary sources) to the tune of right around 50 note cards to review apiece. Course pacing guide tells me we’ve got Huck Finn in the rearview and a unit on Walt Whitman and Emily Dickinson right around the corner, so a Civil War-themed mini-game seemed both thematically and chronologically appropriate.

“Attack the Barracks.” A two day game designed to challenge players to work individually and with teammates to critique, revise, and ensure that their note cards are up to snuff in preparation for the next stage of literary research paper writing. On day one of the game, players were asked to come to class with 30 note cards. On day two: they’ll need a total of 50 cards apiece.

Working with your teammates, your challenge is to use properly formatted note cards as the “building blocks” of a sound structure to construct the strongest research paper barracks possible. Structural integrity is essential whether you’re building an argument or an architectural design! And that means quality control in your building materials is essential.
SO.
Points will only be awarded for top-quality structures. Which means that each brick that doesn’t pass quality control standards will immediately cause your team’s entire barracks to collapse — thus losing you any points you might otherwise have been entitled to earn. Here’s one such example of what a top-quality note card might look like:

The Gameplay:
Setup took less than a minute for this game using the process below:
The Results:
Once the first group played a single note card successfully, fist-pumps and high fives abounded. Students actually felt proud of their well-designed cards! And teams quickly came to value the company of classmates who’d put in some serious effort in completing research efforts that were clear, consistent, and of high quality throughout. Suddenly, the student researchers with the strongest note cards became heroes to their peers, and it became “cool” to have put in an honest effort in constructing quality research (rather than just racing through 50 note cards of spotty quality and questionable structural value). Students were quickly taking note of what separated “good” note cards from those that were simply “good enough.”

Very soon it became evident that some students’ note cards (likely completed late at night or earlier this same morning) were not going to be of much value to a quality control-based challenge for their team — but what was most impressive to me as the “game designer” was how after just one quick round of play, students immediately shifted into the role of teachers both in working with their groupmates and in correcting their own mistakes: social pressures inspired teamwork. Students spotted formatting errors on cards before new questions were asked. Teams pointed out structural flaws in one another’s note cards through an impromptu process of peer review in order to ensure that their team didn’t play any “bricks” that wouldn’t hold up against a critical inspection. And players worked frantically to add missing components on their own note cards to help add new “bricks” to their team’s arsenal.


The End:
Class flew by, and once they’d developed a knack for how the Boss Battle gameplay mechanics worked, students were chomping at the bit to score more XP — eager to put in additional work and genuinely excited to play future rounds of the “game” while building confidence through increasingly difficult challenges (more cards, harder questions, more exact specifications, etc.). Bottom line: the activity was a home run by any measure.

So we wrapped class with a cliffhanger, gave everybody the homework assignment to finish up the rest of their note cards to standard (which, for a number of students, meant some serious re-researching and re-writing), and set about the waiting game for the return of the game in the form of the 50 card “boss battle” to come in exactly 24 hours.

Of course, we all know that bosses always come back stronger the second time around…

John Meehan (@MeehanEDU) is an English teacher and school instructional coach at Bishop O’Connell High School in Arlington, Virginia. He began his teaching career in 2010 as a career switcher through The New Teacher Project, after spending five years working in social media and event marketing. He is a 2017 ASCD Emerging Leader, and an alumnus of the 2016-2018 Bill & Melinda Gates Foundation Teacher Advisory Council. In 2016, he was named one of Arlington, Virginia’s “40 Under 40” by the Leadership Center for Excellence. He is a past presenter and regular attendee at educational conferences throughout the United States, including the annual conference for National Catholic Education Association, ASCD Empower19, and the Play Like a Champion Today: Character Education Through Sports summer conference at the University of Notre Dame. He’s an avid runner who’s completed more than three dozen marathons, half marathons, long-distance road relays, mud runs, and obstacle course races. John lives in Silver Spring, Maryland with his wife, Laura, a high school music teacher and fellow graduate of The Catholic University of America, and a giant-sized Maine Coon cat named Jack. View all posts by John