Without a doubt, one of my favorite “old school” Nintendo games of all time is Galaxy 5000 — a space-themed racing game created by Activision waaaaaay back in 1991. Released a full year before the original Mario Kart hit the market and forever changed the landscape of “battle” inspired racing titles, Galaxy 5000 was (to use an awful, but obvious pun) light years ahead of its time, with customizable space racers doing loops around planet-themed race tracks while players unlocked new ships and increasingly deadly power-up items to blast their competition right out of the starry night sky.

Never played it? No sweat — it’s a pretty obscure one. So let’s go to the video tape!

If the high energy visuals of the races themselves didn’t win you over, the game featured this AH-MAZE-ING and super interactive player status report feature between races (skip ahead in the video to about 3:40 or so). And it might just be the most well-designed component of the game.

After each race ended, players were given a rundown of all the points, powerups, and in-game cash that they had scored — as well as a quick look at all of the damage that their beloved spaceship had sustained in that particular race. Pretty standard fare, right? Here’s the fun part: from there, the game presented players with a choice where they could act on the feedback that the status report had just provided them by pressing the control pad left or right to add or subtract from their winnings in order to make whatever repairs to the ship they felt was necessary. Resource management 101. Even better? The game DID NOT FORCE YOU TO MAKE ANY CHANGES or repairs to your ship. It simply presented you with relevant data to inform your decision, and gave you the option to act on the information or ignore it at your own risk.

Check out the scratches and dents in the screenshot below: 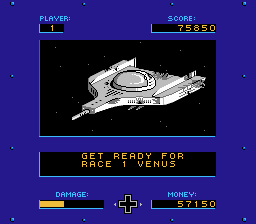 See how the spaceship is moving into the next race with a fair bit of damaged still unaddressed? What an empowering example of meaningful player choice!

Do you spend that hard-earned cash you could be saving up for a powerful new spaceship to hammer out the dents in your old one — thereby putting yourself that much further away from purchasing an upgrade (but ensuring that your current ship is less likely to be destroyed in the next race)? Or do you chance it for the next race and roll into battle with a ship that’s a little worse for wear while holding out hope that you’re just a few bucks shy of buying a sweet new ride anyhow (of course, a damaged ship is one step closer to being blasted apart)?

Somewhere, the kind folks who continue to service my 2010 Ford Focus with upwards of 120,000 miles are smiling, I am sure. #LifeLesson

Putting this same feature into teaching practice, then…

In eight years of teaching, I’ve become absolutely convinced that regular student surveys are an essential cornerstone to highest quality instructional practice. Gamified classroom or not: quick “damage reports” between races (or units of study) provide a powerful insight regarding how players (students) in your class are feeling about all of these endless loops they’re being asked to run and obstacles they’re being asked to overcome around the academic track that is your course curriculum. And just like Galaxy 5000 — not every little scratch or dent needs to be addressed before you move on to your next race. But it sure can pay huge dividends to watch for damage trends as they emerge. Banking solely on once-a-year, end-of-course feedback surveys seems like a world of missed opportunities. To borrow the Galaxy 5000 metaphor: if you’re not taking regular assessment of yourself between races (units) to inspect how damaged your ship (teaching) is? The thing might just get blown to smithereens before you even see it coming.

Thanks to Google Forms, student surveys can be created, distributed, and completed by entire classes of within minutes. Using a text messaging feature like Remind (or your school’s LMS, or good old fashioned bulk email), these can even be fired off as a warm-up activity or homework — so you don’t even have to sacrifice more than a few quick minutes of instructional time as you go (plus you can choose to require students’ names to be included, or simply gather anonymous feedback). I typically fire off a new “what’s working?” “what’s not?” survey each time we wrap up an old unit (it’s a perfect “Do Now” activity to keep students engaged when I’m collecting end-of-unit essays, or passing back graded work).

From there, it’s up to you what you do with the information that your surveys provide. What’s that old Star Trek line again?

“To boldly go where no man has gone before…”

John Meehan (@MeehanEDU) is an English teacher and school instructional coach at Bishop O’Connell High School in Arlington, Virginia. He began his teaching career in 2010 as a career switcher through The New Teacher Project, after spending five years working in social media and event marketing. He is a 2017 ASCD Emerging Leader, and an alumnus of the 2016-2018 Bill & Melinda Gates Foundation Teacher Advisory Council. In 2016, he was named one of Arlington, Virginia’s “40 Under 40” by the Leadership Center for Excellence. He is a past presenter and regular attendee at educational conferences throughout the United States, including the annual conference for National Catholic Education Association, ASCD Empower19, and the Play Like a Champion Today: Character Education Through Sports summer conference at the University of Notre Dame. He’s an avid runner who’s completed more than three dozen marathons, half marathons, long-distance road relays, mud runs, and obstacle course races. John lives in Silver Spring, Maryland with his wife, Laura, a high school music teacher and fellow graduate of The Catholic University of America, and a giant-sized Maine Coon cat named Jack. View all posts by John